Children become engaged when learning is fun. Here are 3 simple games that can be used for learning the alphabet letters and sounds or words to be learned by sight. By the end of first grade, students usually learn the first 100 words that are used the most, which make up 50% of what we read! These are words such as “the, of, saw, was,” etc. You can look up “high frequency words” on the computer and find the first, second, third, and fourth hundred high frequency words. By second grade, children learn many of the second and third hundred high frequency words as well.

It takes practice for these words to become recognized automatically. Often it takes encountering a word about 40 times for it to become memorized.  The following games will help give your child this practice while having fun.

You or your child can fill in the letters or words they’re learning on a homemade BINGO card. Fold a paper 4 times to make 16  squares or draw lines across and down to make your own grid with the number of squares you want. The object is to cover a line across, down, or diagonally with words or letters called out to make a BINGO.

After the first BINGO, you can continue to play to cover the whole board (blackout). 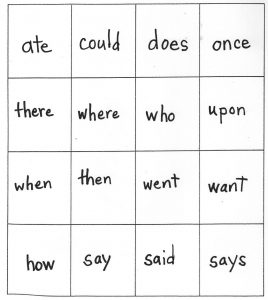 Penny Toss is played in a similar way to BINGO. Make a grid of four by four squares. The object of the game is for your child to toss a penny and then say the name and sound of the letter – or the word, that the penny lands on. 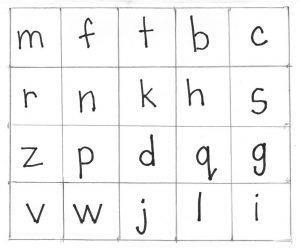 Index cards can be used to write matching sets of letters or words. Rhyming words can also be used for finding the matching rhyme. These can be easy three letter words like  cat/hat, or words with “2 vowels go a-walking and the first one does the talking” like sail/tail, boat/coat. The cards are turned face down in rows. Players take turns turning over 2 cards, looking for matches. If they match, the player gets an extra turn. This game is great for practicing memory skills as well as letter or word recognition. 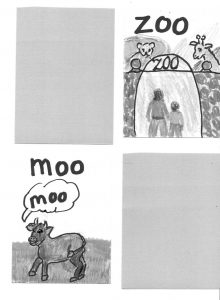 The Steps of Writing

4 comments On Fun with Words & Phonics